← How to write a critique for a research paper?
Managing your advisor: the art of the meeting →

What better time to blog about charity than during Ramadan, the month of giving? In late 2015, we partnered up with LaunchGood, a crowdfunding platform, to study ways to improve the overall success of the different charitable campaigns they support. We decided to tackle the problem from a data-driven perspective: we examined two years worth of data on campaigns and donors. Here is a detailed technical report of our key findings.

tl;dr — the short version of the paper:

We had a simple idea: if we could redistribute funds from campaigns that raised more than their fundraising goals to other less successful campaigns, we would increase the platform efficiency (measured as campaigns meeting their goals). This is rather obvious and requires no data analysis to affirm. It is also quite problematic:  donors would not appreciate a platform redistributing their donations across unknown campaigns without their explicit permission. Such a scheme could potentially incentivize campaign organizers to inflate their goals or spend less effort creating persuasive campaigns.

What is less obvious and more interesting is whether we can achieve efficiency gains by (i) only redistributing the funds of a donor within campaigns she contributed to and (ii) within the time frame that her contributions and campaign periods overlap. Without access to real data, it is difficult to answer this question. First, it not clear how many repeat donors exist on a platform to support this form of redistribution. Second, it is not clear how often contributions to different campaigns by the same donor overlap. Armed with two years worth of data generously provided by LaunchGood, we set out to answer this question.

Our paper demonstrates the viability of such a redistribution: redistributing only among campaigns a donor has contributed to does increase efficiency.  Also, even if a small proportion of repeat donors accept such redistributions, one can still achieve efficiency gains.

So why is it that crowdfunding platforms don’t support such redistributions?

It is tricky! Understanding the psyche of donors is crucial to maximizing contributions. As Obama’s team of campaigning strategists point out, the more complicated and longer the donation process is, the fewer the donations that occur. So if you ask donors to select multiple campaigns to co-fund and to fine-tune how redistributions occur, the hassle of the process itself might turn them off. If you redistribute without explicit permissions, you will anger your base of donors.

Simpler redistribution schemes might still work. For example, LaunchGood just rolled out an automatic giving plan for Ramadan, where donors provide LaunchGood a set budget to distribute funds from every day for 30 days as they see fit among different campaigns. An exit opt-in strategy might also work for repeat donors. On completing a subsequent donation, the system can ask them if they would be willing to redistribute across earlier contributions and the most recent one. 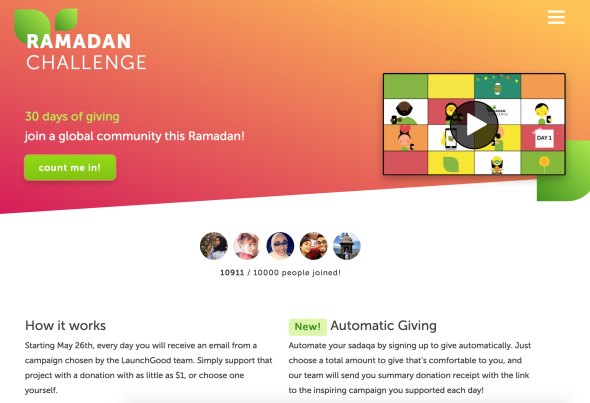